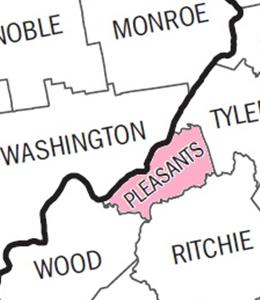 Pleasants County is one of the smallest of West Virginia's counties, lies by the Ohio River in the western part of the state. The county is divided into two nearly equal portions by Middle Island Creek. Within its borders, both fertile bottom land and the highlands of the Appalachian foothills can be found.

Agriculture and timber were for many years the major sources of income. These were supplanted starting in the 1890s by oil and gas. The oil fields proved to be extremely productive and brought great wealth to the area. With the growth and development of Marcellus Shale the area is once again seeing significant and developing sources of revenue from this sector.